Holidays to Rome are as impeccably composed as the thousands of desirable addresses you’ll stumble upon in a city that celebrates history, art, fashion and food in style. The French gifted Rome the stately open-air Spanish Steps, Emperor Vespasian commissioned the world’s most breathtaking amphitheatre in back in AD 72 and the Vatican, now a country in itself, began life in the 4th century as a basilica built over St Peter’s grave. Expect Old Masters housed in private galleries, centuries old history inside fresco-filled churches and stories of bloody gladiator battles and lavish temples dedicated to Olympian Gods. These well-preserved ruins provide a jaw-dropping backdrop to a thoroughly swish city – la dolce vita lived out in Renaissance piazzas, gilded bars and Via Condotti’s high-end fashion.
Rome holidays are as photogenic as your wildest dreams and it does well to walk the ancient sites of the Pantheon and Palatine Hill but also stop and linger a while. There’s the suited and booted sipping espresso in 18th-Century cafes, vespas zipping past ornate piazzas and the glam squad navigating cobblestoned streets in heels with ease as passeggiata unfolds. Roam pretty streets with cut-to-order pizza slices, savour Instagram-worthy gelato, take aperitivo hour in Piazza Navona and dine rooftop, Michelin starred, with fairytale Colosseum views.
Tell us you want to throw a coin in the Trevi Fountain and we’ll agree you must, but also recommend a late night return as the stone glows gold in the moonlight. If you’re inspired by movie scenes set in Rome we’ll put you in the heart of Villa Borghese, Piazza del Popolo and the Mouth of Truth in the portico of Santa Maria in Cosmedin Church. Or ask us about the Colosseum and we’ll share secrets of the Third Tier underground tunnels and also suggest walking at dusk behind Palazzo dei Senatori to see the ancient Forum ruins illuminated after dark. 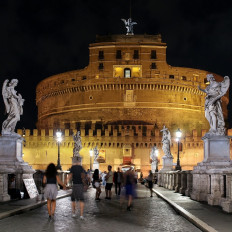